Drone footage recorded in the area of Bovary located northeast of Kyiv shows an NLAW initiated point blank ambush on a Russian tank unit in the middle of a road.

From the footage it seems a Ukrainian forward infantry element took position in and around the wood left west of the Russian armor column and started to engage the vehicles from close range with anti-tank weapons such as the NLAW, some RPG variants and small arms fire.

Russian forces reacted with counterfire from their tanks and infantry fighting vehicles and quickly began to disperse after the first shoots.

The ambush occured on the E95 about 10km north of Bovary and about 5km north from Skybyn, the place where Ukrainian forces recently released another drone video that showed the retreat of the 6th Russian Tank Regiment from the 90. Tank Division after accurate artillery, anti-tank and tank fire by Ukrainian troops.

It is possible that this video is from the same battle but since we can not confirm this it also can be that this is from another Russian attempt to close in on Kyiv via Bovary.

In the end of the video we deliver some more context to the footage so make sure to watch the video to the end. 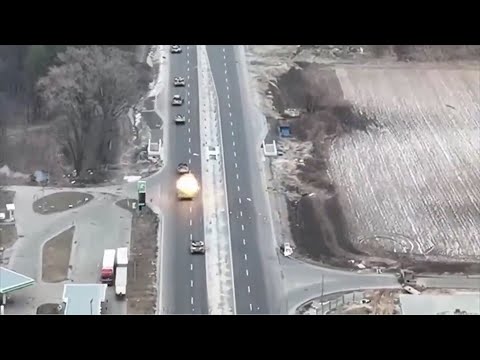 Drone footage recorded in the area of Bovary located northeast of Kyiv shows an NLAW initiated point blank ambush on a Russian tank unit in the middle...