BohoL Adventure in 2Minutes... What to see in this Marvelous Province

Bohol officially the Province of Bohol (Cebuano: Lalawigan sa Bohol; Tagalog: Lalawigan ng Bohol), is an island province of the Philippines located in the Central Visayas region, consisting of the island itself and 75 minor surrounding islands. Its capital is Tagbilaran. With a land area of 4,821 km2 (1,861 sq mi) and a coastline 261 km (162 mi) long, Bohol is the tenth largest island of the Philippines.

The province of Bohol is a first-class province divided into 3 congressional districts, comprising 1 component city and 47 municipalities. It has 1,109 barangays.[8]

The province is a popular tourist destination with its beaches and resorts. The Chocolate Hills, numerous mounds of brown-coloured limestone formations, are the most popular attraction. The formations can be seen by land (climbing the highest point) or by air via ultralight air tours. Panglao Island, located just southwest of Tagbilaran, is famous for its diving locations and is routinely listed as one of the top ten diving locations in the world. Numerous tourist resorts and dive centers dot the southern beaches. The Philippine tarsier, amongst the world's smallest primates, is indigenous to the island.

It was the home province of Carlos P. Garcia, the eighth president of the Republic of the Philippines (1957–1961) who was born in Talibon, Bohol.

On 15 October 2013, Bohol was devastated by a 7.2 magnitude earthquake whose epicenter was 6 km (3.7 mi) south of Sagbayan town. The earthquake, which also hit southern Cebu, claimed 156 lives altogether and injured 374 people. It also destroyed or damaged a number of Bohol's heritage churches.

In 2017, the provincial government began initiating the nomination of the entire province to the UNESCO Global Geoparks Network.

For business inquiries and collaborations, please send us an email at richardthejuanderer@gmail.com

BohoL Adventure in 2Minutes... What to see in this Marvelous Province 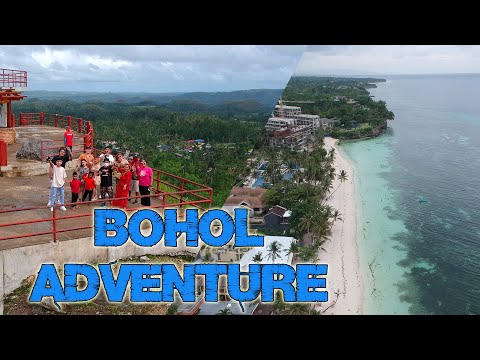 Bohol officially the Province of Bohol (Cebuano: Lalawigan sa Bohol; Tagalog: Lalawigan ng Bohol), is an island province of the Philippines located in...