Commemorate when the stars aligned for your special moment with an exclusive 10% discount on any order with the code ScreenCrush. Go to http://underluckystars.com/screencrush to get your star map now!

Star Wars: Obi-Wan Kenobi’s first trailer is finally here! We break down the trailer, and explain dozens of easter eggs that connect to Star Wars, and real-world events and settings. Is Han Solo in the trailer? Is Kenobi talking to Qui Gon’s Force ghost? And of course, we explain the Luke Skywalker cameo and the forthcoming duel with Darth Vader!

We open on the sands of Tatooine, where Ben Kenobi spent his years in exile between the trilogies. There is a lot of symbolic meaning to desert sands and ruins. The sands call to mind biblical locations like Babylon, and sireal ancient egypt. Places where ancient civilizations flourished, were destroyed, and rebuilt. Just as the Jedi order was destroyed and is being rebuilt.

Desert sands call to mind works like Percy Shelly’s ozymandias, where all that remains of a once great kingdom are two broken legs of a stye and a plaque that reads look on my works ye mighty…

Star Wars isn't just about what’s happening, it’s about how it makes us feel. Star Wars draws from ancient mythology and cultural references–sp when people see these sands blowing on a rock, we subconsciously think about these ancient lands. Like we’re all archaeologists uncovering the ancient truths of Obi wan kenobi.

You probably recognized the music here. That is form the moment Ben Kenobi was first revealed in a new hope. In fact, john williams is returning to star wars to score this series

Kinzie L on twitter pointe out that the music that opened the trialer is a modfied theme of the battle of heroes–the duel of Anakin Skywalker and obi wan from revenge of the sity. Showing that that duel is still echoing in Obi-Wan’s mind.

Then we see him walking the streets of a Tatooine city. Now, I doubt this is most Eisley. That’s pretty far from the lars homestead where Luke grew up. Also, Ben feels the need to explain Mos Eisley to Luke.

This is also way too small to be Mos Espa, from the phantom menace and Book of Boba f=Fett. So i think this is most likely Anchorhead, the town closest to the lars homestead. This is the location of power converters at Toschi station.

It looks like Obi Wan is working as a stone cutter. Later in the trailer we see a transport bringing people into a town. I’m guessing this is some kind of company transport, bringing in all the people who work in the outskirts to their jobs in town–common in rural areas. You even see a line of people shuffling by him, like their shift has ended.

We saw similar makeshift tent workplaces from another desert world–Jakuu–in the force awakens. Next we see Obi Wan riding home across the Dune sea, as his narration intones [fight is done, we lost.]. I’m curious who he's talking to here. I have theories, but I’m going to speculate on the story a little later in the video. 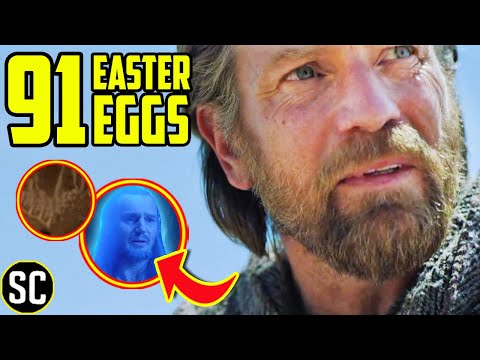 Commemorate when the stars aligned for your special moment with an exclusive 10% discount on any order with the code ScreenCrush. Go to http://underlu...