In this scene from “The Batman,” a superhero flies, but it’s mostly by the seat of his pants.

Batman (Robert Pattinson) has found himself in an interrogation room after an altercation he was present for turned deadly.

Lt. James Gordon (Jeffrey Wright), who has developed a partnership and trust with Batman, secretly helps him flee the scene. But in Matt Reeves’s take on the series, the Caped Crusader doesn’t have a smooth handle on his tech.

In his narration, Reeves said that he wanted to present a less polished version of Batman than we’ve seen before.
“Rob as Batman is never really in control,” Reeves said. “He’s just barely making it.”

Reeves went in this direction with the character to humanize him a bit and make him more relatable. When Batman reaches the ledge in the scene, he’s actually afraid of how high up he is.

For the flight tech, Reeves found inspiration in wingsuits, a webbed jumpsuit used in extreme sports like skydiving and BASE jumping to experience more airtime. Some of the shots of the sequence are patterned after YouTube videos Reeves watched of wingsuit moments in all their harrowing, will-they-survive-or-not wonder. And strategic camera placement makes it feel like the audience is taking that harrowing, blundering journey right along with the Batman.

Read the New York Times review: https://nyti.ms/3t2Z2Ib
Subscribe: http://bit.ly/U8Ys7n
More from The New York Times Video: http://nytimes.com/video
----------
Whether it's reporting on conflicts abroad and political divisions at home, or covering the latest style trends and scientific developments, New York Times video journalists provide a revealing and unforgettable view of the world. It's all the news that's fit to watch. 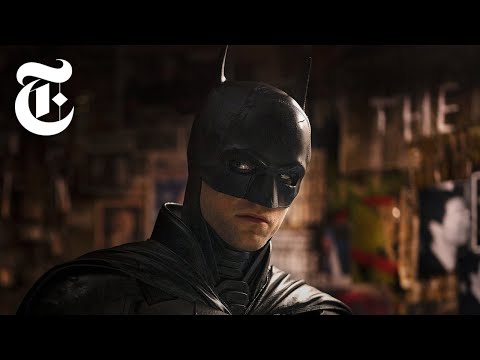 In this scene from “The Batman,” a superhero flies, but it’s mostly by the seat of his pants. Batman (Robert Pattinson) has found himself in an interr...